The view from Katesgrove Hill 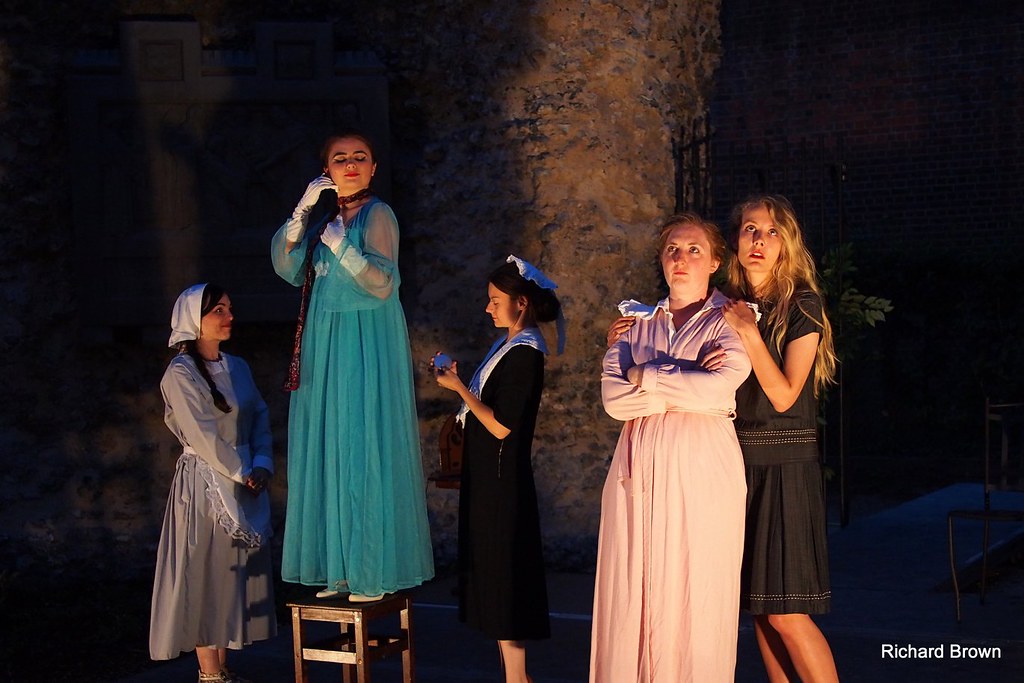 The Progress Theatre‘s delightful production of ‘Much Ado’ transports us to an English country house in May 1945, with most of the action taking place on the veranda and gardens. This clever choice allows the cast to make the most of the glorious outdoor setting – the magnificent Reading abbey ruins. It also means that a simple stage and few props are sufficient (a wireless and a patio table with chairs).

The play opens with the chimes of Big Ben and the BBC Home Service announcing VE Day. Victorious RAF officers in full uniform return from battle – Peter (a benevolent Matt Tully) and his brother John (a restless and resentful Ian Belcher). They are accompanied by fellow officers, young Claudio and Benedick, who are soon embroiled in relationships with Hero, daughter of Leonato (master of the house) and Beatrice, Leonato’s niece. 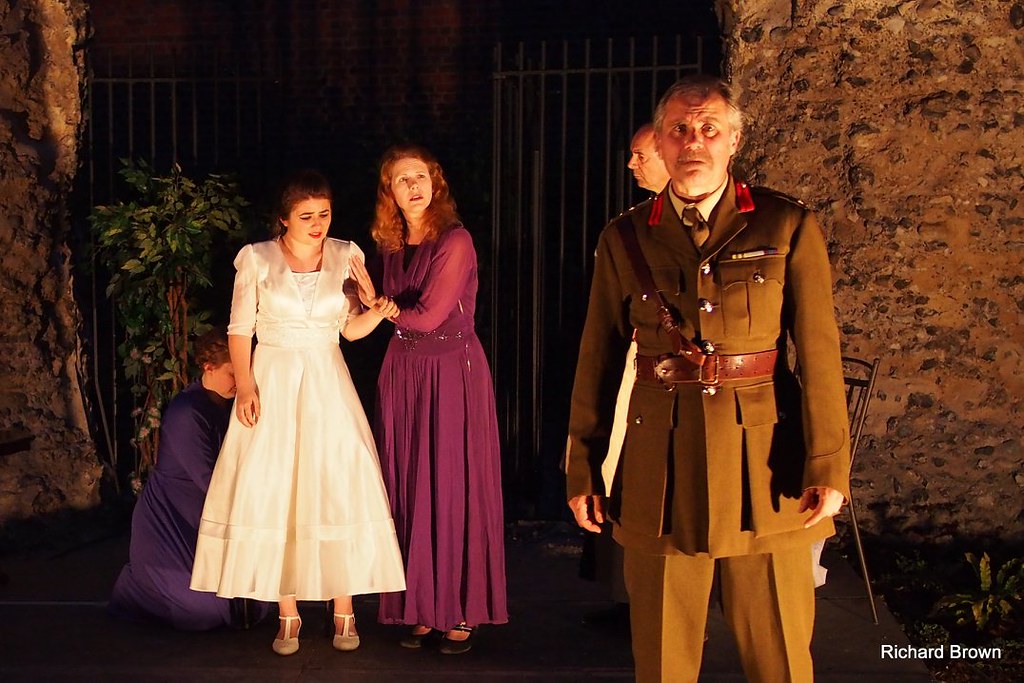 At this point, we see the theme of love take centre stage, with a myriad of complications: Beatrice and Benedick resume their war of wits, each determined to outdo the other. As Beatrice, Kate Shaw is a feisty, independent woman who is determined not to fall in love. Dan Clarke is superb as Benedick, employing both verbal and physical humour while declaring that he will never marry. In contrast, it is love at first sight for Claudio (portrayed with a touching youthful enthusiasm by Matt Urwin) and Taylor Rupp’s Hero, a sweet and innocent young girl.

Alas, the path of true love never runs smooth. The devious John concocts a scheme to thwart Claudio and Hero’s wedding plans and succeeds in casting doubt on Hero’s virtue. Even Hero’s father is convinced – we see Paul Gallantry’s Leonato change quickly from genial host to embittered parent when his daughter’s honour is in question.

However, this is a comedy and love will prevail. A clever solution (involving masks and hidden identities) is found to prove Hero’s innocence and save the day. A second solution to solve the problem of Beatrice and Benedick results in a very funny series of scenes that include eavesdropping and secret notes. 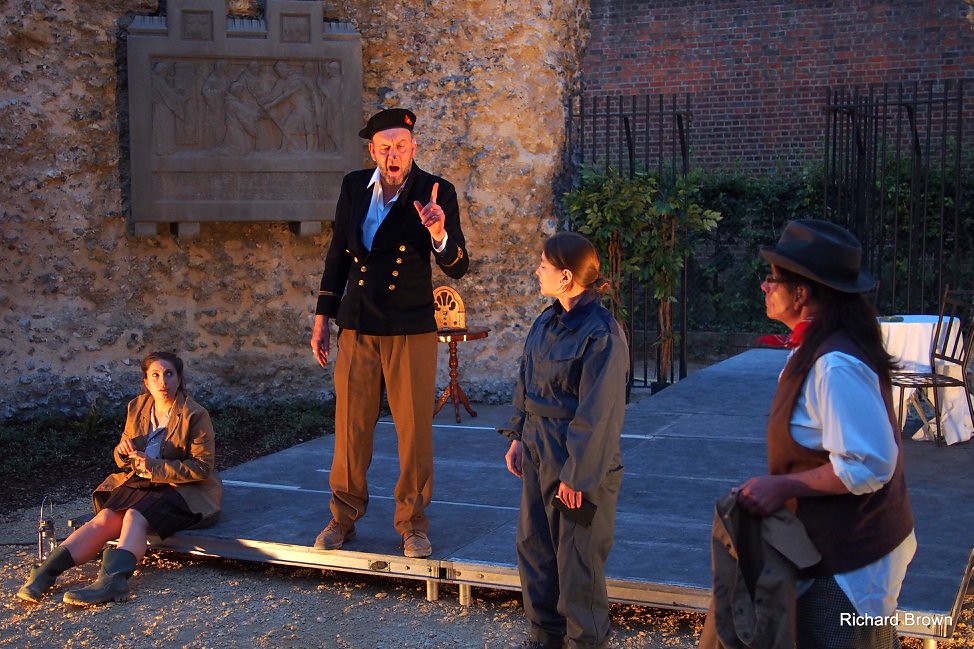 Comic interludes are provided by the ensemble of the Watch. The leader, Dogberry (a hilarious turn by Mikhail Grozny) does anything but lead, while confusing everyone with his malapropisms. The members of his team (Laura Barns, Heather Eley and Juliet England) use physical humour to good effect to exaggerate their incompetence. 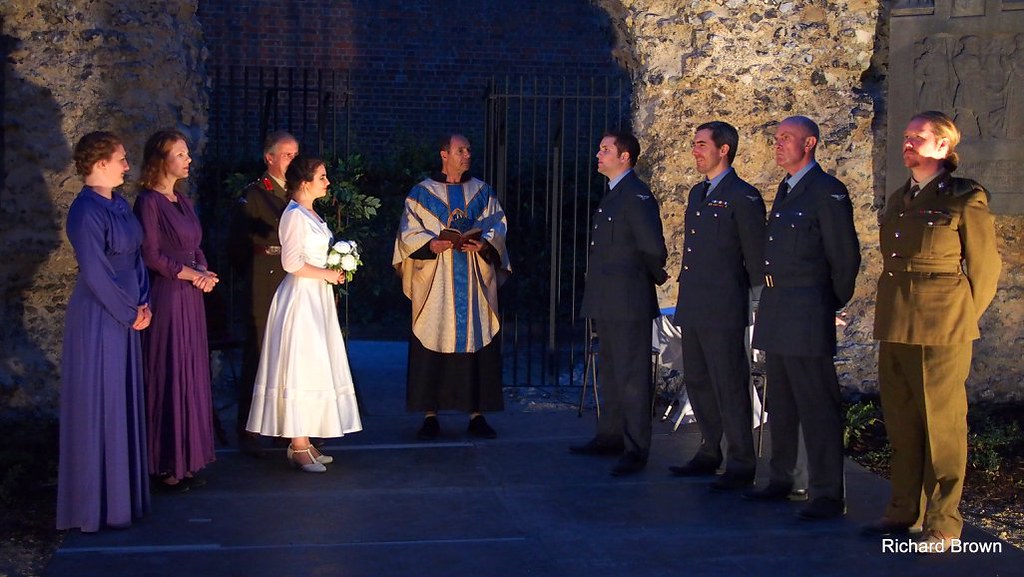 Trevor Dale’s skilful direction of this crowd-pleasing comedy and the unique setting – the beautiful abbey ruins – make this an evening to remember. Don’t miss it!

‘Much Ado About Nothing’ is performed by the Progress Theatre in the newly re-opened Reading abbey ruins near the Forbury Gardens in the town centre at 7.45pm each evening until Saturday 21 July, except Sunday 15 July, when there is no performance. Tickets can be bought online.